A Matter of Life and Death....warning - a bit of a sad story!

Over the past few months we've had a couple of nesting Blackbirds in the ornamental grapevine above our kitchen window. I love Blackbirds, but I do have a small issue with them as they are a non-native species and seem to becoming more and more successful in our local area of Daylesford. I often see them in bushland areas now and hope that it's not at the expense of the natives, especially as they are aggressive to other birds, particularly during the breeding season. With regards to the nest at our house, the female was already sitting on eggs so I deemed it was too late to remove it.

And so began what can only be described as a fairly stressful observation period. The first clutch of eggs as far as I could see didn't even seem to hatch and I wasn't privy to the cause. I thought that would be the end of it, but fairly quickly the female was sitting again. The second brood were regularly set upon by Currawongs and on several occasions, we had to rush outside to scare these large, predatory birds away. On my return home one day, I noticed both parents were returning to one of our native shrubs in the garden on a regular basis and upon quiet and closer examination, I spotted one small fledgling. Normally, they lay 3-5 eggs, so there was only 1 left. I saw it fairly regularly around the garden, although it did get attacked by a magpie one day. It managed to make it into a tree at the rear of the block and the magpie followed. I hoped it would survive and luckily a few days later I saw it again...what a relief!

The male and female obviously bred again and once more the female was sitting on eggs whilst the male raced around the garden feeding her. Once she started to search for food too, we knew the eggs had hatched. We got quite used to seeing them both searching the garden and flying back to the nest with mouthfuls of worms and insects. As they grew we could even see that there were three little hatchlings in the nest. One morning, I stepped out and saw the male Blackbird and a Currawong fighting by our front gate. The Blackbird fell to the ground following this attack and I rushed to its aid. Unfortunately, my dog was already out in the garden and saw all this happening and got there first. If the Currawong hadn't been responsible for its ultimate demise, my dog certainly was. The poor male was still alive and gasping for air and although looking a bit 'ruffled' it had no obvious wounds. I quickly put it in a small box with a lid on but when I checked a few minutes later it was dead. I was devastated and angry at my dog, although I couldn't blame him. And of course there were a few tears.........

My thoughts quickly turned to the female who was still hopping around the garden searching for grubs. I knew that she now was on her own to feed three hungry little birds. I googled for help and found out that dog food is a good food for blackbird chicks. I rushed down to the shops and bought some and put some out. It took her a while to find it but once she did, she ate a little and then took some back to the nest. Every day we put some food out for her and she'd collect it.

A couple of days ago, I arrived home early one evening and realised that the nest was empty. I looked around and could see the female in a shrub on the neighbour's property bordering ours. I watched her fly from that shrub to an acacia tree on ours and on closer inspection saw that there was a fledgling in each. Once again we put out some food for her and she immediately shared it between her two offspring, which was very comforting to see. But where was the third? Looking around I noticed our dog snuffling in amongst our herb garden just under the nest. He was having a good sniff but then walked away. I went over and found the body of the third little bird. I couldn't help but feel sad for it and wondered how it had died. Had they been attacked again by Currawongs and had had to make a quick escape? This seemed to be the most logical explanation as the baby bird didn't seem to be developed enough to fly. Perhaps it had been the youngest too? We'll never know, and of course, nature has to take its course, as cruel as it may seem. By Christmas Day, we could only find one fledgling! Once again, there were no clues as to the other fledglings demise.

On Boxing Day, Andy and I had been gardening and it started to shower. We decided to try and find a film to watch for the afternoon. Suddenly there was a loud bang at the window and jumping up we saw the fledging rolling on the deck, having flown into the window. We couldn't believe it! Could the last of the fledglings be about to die too? I rushed outside and picked it up carefully and took it right back to the garden fence and placed it on the ground underneath the shrub that it had been living in. Ten minutes later, it was hopping around whilst mum kept guard close by. We once again put some dog food out for them and it was very quickly eaten.

So at this point of time, out of a family of five, only two remain. What seem's to be the totally benign surroundings of our own garden has proven to be a dangerous place to survive. The adults have fought off potential threats and the mother continues to do so, with so much courage and fierceness. I hope the last fledging survives and the female gets to find another mate next year. As well as being a real eye opener to us, it's also been a brutal reminder that these constant battles are being fought by every type of animal in the garden. Kookaburra's eating skinks, small birds eating thrips, swallows catching flys on the wing, insects eating other insects, birds attacking other bird nests, etc. One thing I do know for sure, is that the nest is going to be dismantled.....we have enjoyed helping out but we don't want to be party to so much suffering and stress next year!

Photo 1 - Fledgling from 2nd brood Photo 2 - A fledgling that didn't make it - definitely too young to be learning to fly! 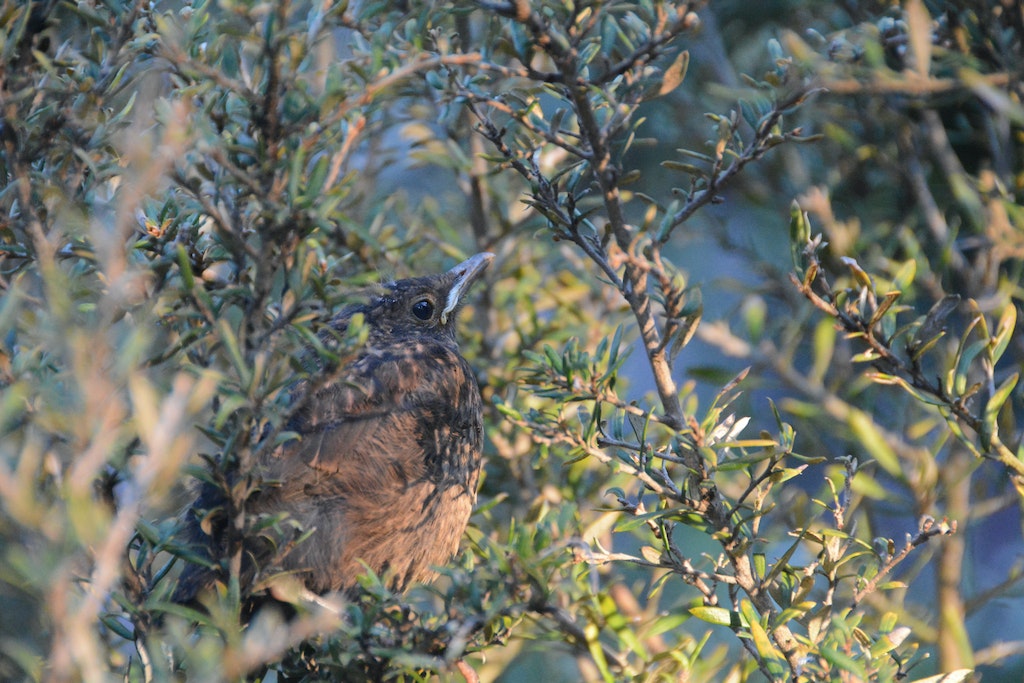 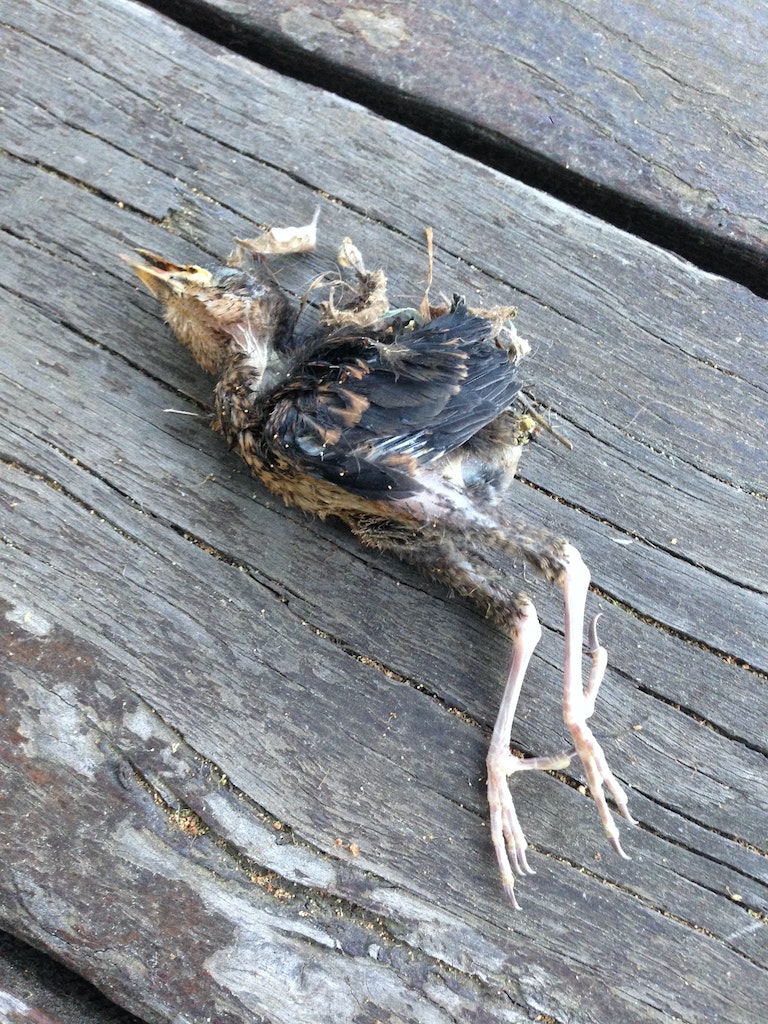